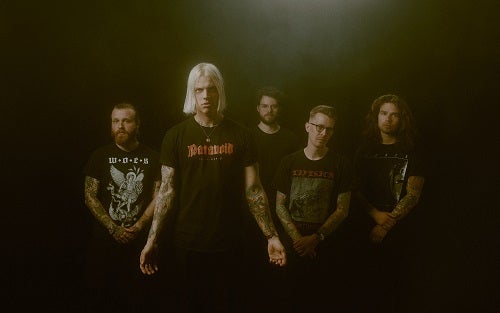 After the first capture of European stages in spring of 2022, CABAL proudly announce they are part of the Impericon Never Say Die! Tour 2022. Together with headliners SUICIDE SILENCE and AFTER THE BURIAL, also CURRENTS, SPITE, INVENT ANIMATE and BOUNDARIES will join the tour. Alongside with this mindblowing lineup, the Danish metal experts CABAL are heading to 20 different cities all across Europe and the UK to leave a long-lasting and extremely heavy impression!

The tour kicks off on November 5th in Cologne, Germany, where CABAL will firstly show their extreme metal from Denmark. The band will continue exactly where they stopped on the last tour: Pure energy, excessive atmosphere and a totally packed load of metal that will blow the audienc away!

CABAL comments on the upcoming tour:
"We are beyond excited to once again be part of the Never Say Die! Tour. Even though last years edition of the tour got short due to the pandemic, it was still an absolute blast and we can't wait to actually to the full run this time around. We've all been going to to this tour since we were teens, so to once again be a part of it is a huge honor."

CABAL is one of the most brutal and promising heavy acts hailing from Copenhagen, Denmark. The band aims to create a visceral and doom-laden atmosphere throughout both their music and visual expression. The production is crystal clear, whilst the songwriting draws inspiration from everything from black and death metal to djent and hardcore.
Since the release of their debut album "Mark of Rot" in 2018, the young band has managed to make a name for themselves in both Denmark and the rest of the world by playing renowned festivals like Copenhell, Roskilde Festival, Euroblast Festival and Complexity Fest as well as touring in Europe, Japan and North America.

CABAL released the sophomore album "Drag Me Down" in April 2020 - a dark descent into a personal hell brought to life by crushing instrumentals, an oppressive atmosphere and dark personal lyrics delivered with relentless intensity, while still leaving room for experimentation and expansion of CABAL’s signature sound. Add to this guest appearances from metal titans TRIVIUM's Matt Heafy, rising metalcore stars POLARIS’ Jamie Hails and Denmark’s Blackgaze darlings MØL’s Kim Song Sternkopf and there is no doubt that CABAL is a band with friends in every corner of the metal scene.
CABAL are currently working on their third full length album which will be released during 2022.